A quickly-growing phone scam targets banking customers via text message, pretending to be with a bank’s fraud department and asking about fake “suspicious withdrawals.” 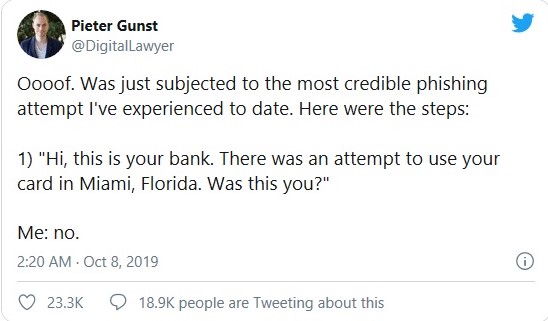 While precautionary measures like text message verification are used to safeguard sensitive accounts from being hacked, one man told “CBS This Morning” that scammers subverted that process, tricking him into believing their scheme in part by using his bank’s actual phone number to text him.

Everything seemed legitimate when Pieter Gunst answered a call earlier this month that appeared to come from his bank. “A lady identified herself as Cindy at my particular bank, and told me there had been a fraud attempt on my account,” he said.

The caller asked Gunst, who lives in California, if he’d attempted a withdrawal in Miami. After Gunst said “No,” she asked for his bank member identification, and he gave it to her.

“And at that point the lady said, ‘OK, we’re going to send you a one-time verification PIN so we can check your identity,'” Gunst told national correspondent Jericka Duncan.

The scammer used Gunst’s ID to prompt a text message from the bank’s real phone number, like others he’d received before, with that verification code. He read it back over the phone, which allowed the caller to access his account and list off actual bank transactions.

“The fact that they used the bank’s own infrastructure to send that code to me, which then allowed them to reset my password, made it very credible,” said Gunst.

It was only when the caller asked Gunst for his bank PIN number that he realized something was wrong, hung up, and called the bank’s real fraud line to lock his account.

Katherine Hutt, who is with the Better Business Bureau, said, “A lot of scams come in through the phone, and more and more we see them coming in through text message.”

Hutt said it should raise a red flag if any caller asks for your name, address, Social Security number, or account numbers. And the best way to make sure you’re really talking to your bank? Just call the number on your card.

“Whether it’s a small local community bank or credit union or one of the biggest banks in the country, they can be impostored, so you just have to be really careful,” Hutt said.

He told “CBS This Morning” several people responded to him with similar stories.